Mark Brandon had an idea. He took a class, bought a kiln and now he’s manufacturing ceramics in his studio at NextFab’s South Philadelphia location. 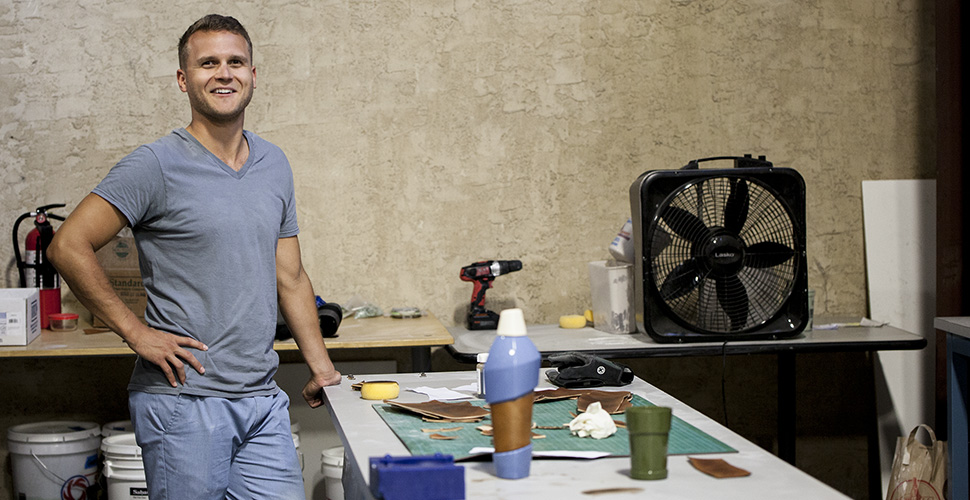 Mark was in Mexico for his wedding when he spotted an interesting alcohol decanter. He and his wife had discussed starting a business that would allow them more personal freedom than a 9-5 job. Inspired by the vessel, he thought that fine decanters would make wonderful commemorative gifts. It would be several years before Mark zeroed in on a workable manufacturing process but he’s now up and running and it’s impressive. 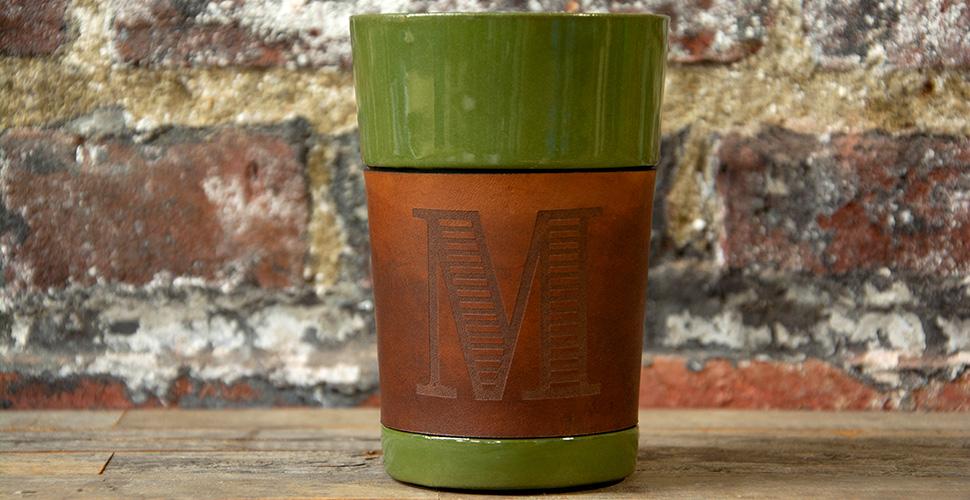 After exploring several processes, Mark landed on slipcasting. Ceramic slipcasting is a process that allows for mass production and very precise pottery making. Slipcasting is a process using a liquid clay or “slip” that is poured into a plaster mold. As it dries, the moisture is drawn from the clay into the plaster and the slip shrinks toward the sides of the mold. As a result, one is able to cast empty volumes such as cups, bowls, vases and decanters.

“I was considering wood turning, I knew I didn’t want to be throwing clay, but then I discovered slipcasting. I thought, ‘we’re in Philadelphia, there’s got to be a place that does classes’,” Mark explains. And sure enough, there was. Mark found The Clay Studio and signed up for a class. That set him on the right path but he didn’t have the means, in a community studio space, to produce on the level that he needed to. Kiln time could be hard to get on short notice and taking a piece from casting to firing could take far longer than he could wait.

Mark knew that he needed a large, dedicated kiln, “I didn’t know where I was going to put a kiln. One of the big limiting factors is the electrical service. If you can get three phase power it’s much better because you are really cooking with juice. I was hoping that NextFab would have space available, and at first they didn’t. NextFab would be the best situation, I could be prototyping here, have all of the software I need and be firing in the studio. Finally Todor (Raykov) and I started talking seriously and I got the go-ahead to be in the warehouse and get the electrical service run.” That electrical service is three phase, 100 amp service and fires the kiln at a whopping 2,235º. 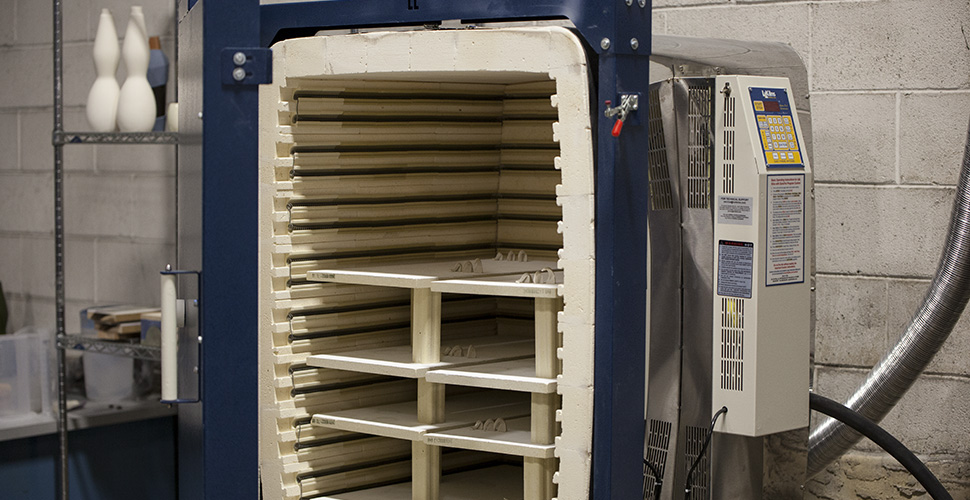 Mark designs his pieces in CAD and machines a wax mold from the CAD files. The Roland CNC at NextFab’s North Philly location is the perfect tool for machining the wax. The wax ‘waste’ as well as old molds can be melted down and reconstituted making the process produce nearly zero waste. After the wax mold is made, Mark makes a rubber “positive” and from the rubber positive he creates the final plaster mold. His work walks the line between arts and crafts pottery and engineering. While most pottery has an aesthetic requirement, Mark also needs his decanters to have a uniform inside diameter. The decanters have corks that need to fit and be airtight and that requires repeatability and a fair amount of precision. The cad renderings, CNC machining and careful monitoring all contribute to the needed precision. 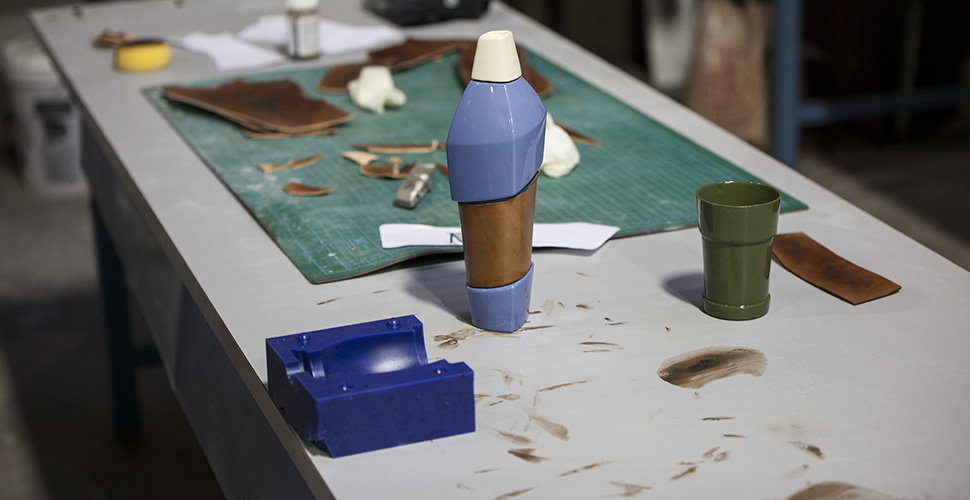 With my mechanical engineering background and my interest in manufacturing processes, the slipcasting made the most sense. A mold is a mold, whether it’s an injection mold or a clay mold, the process is the same. 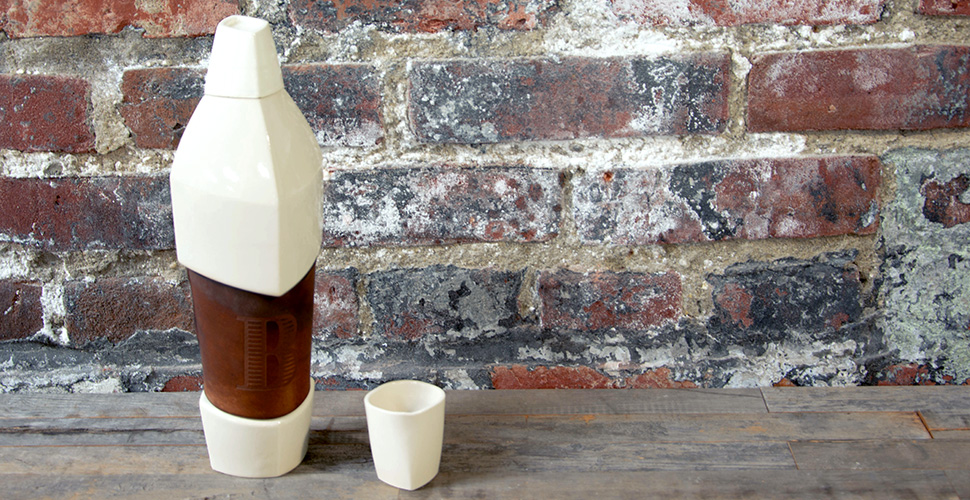 Finally Mark customizes his bottles and cups with hand dyed, laser etched leather bands. The hybrid of hand made custom pieces combined with machine repeatability and a reliable production process makes for a compelling business model. Mark is a perfect example of a member who has an idea, finds a process and quickly develops the expertise to execute that idea.