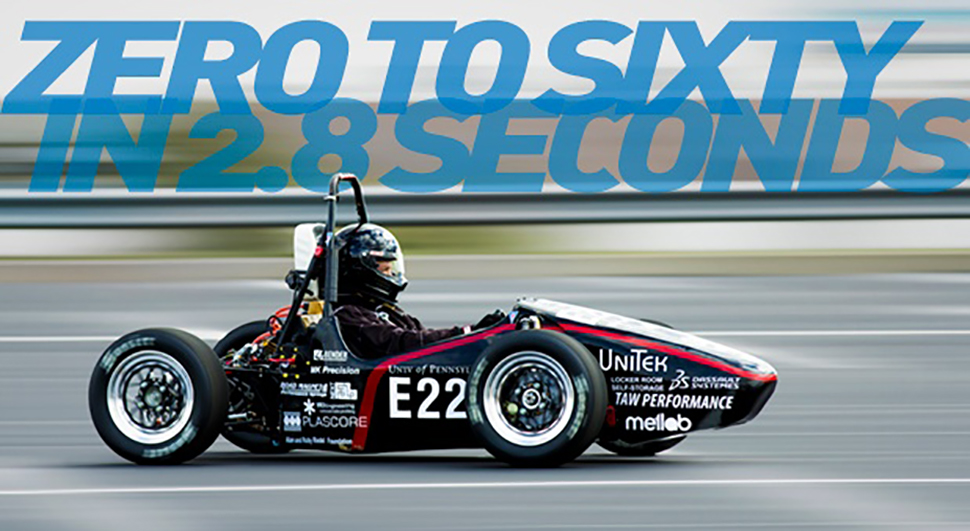 With the help of NextFab, the University of Pennsylvania Electric Racing team has been racking up wins on the track with their zero emissions, zero-to-sixty-in-under-three-seconds, 115hp, Rev1 electric race car. 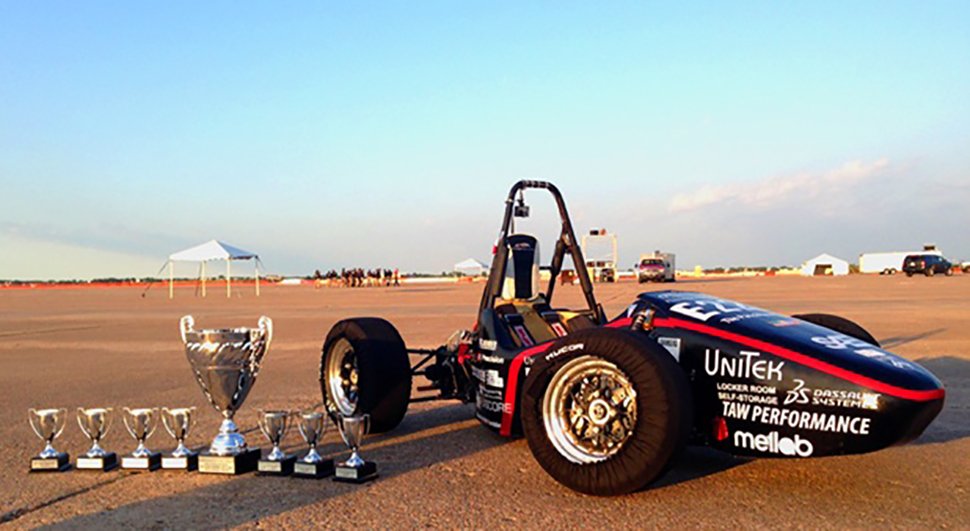 In June 2015, the Penn Electric Racing team competed in the Formula SAE Electric competition in Lincoln, Nebraska. Of the twenty registered teams, Penn Electric Racing took top honors in all eight categories of competition. They took first place in the presentation, design, acceleration, skid pad, autocross, endurance, and fuel efficiency categories, only to be bested by a single car in the cost category with a second-place win. 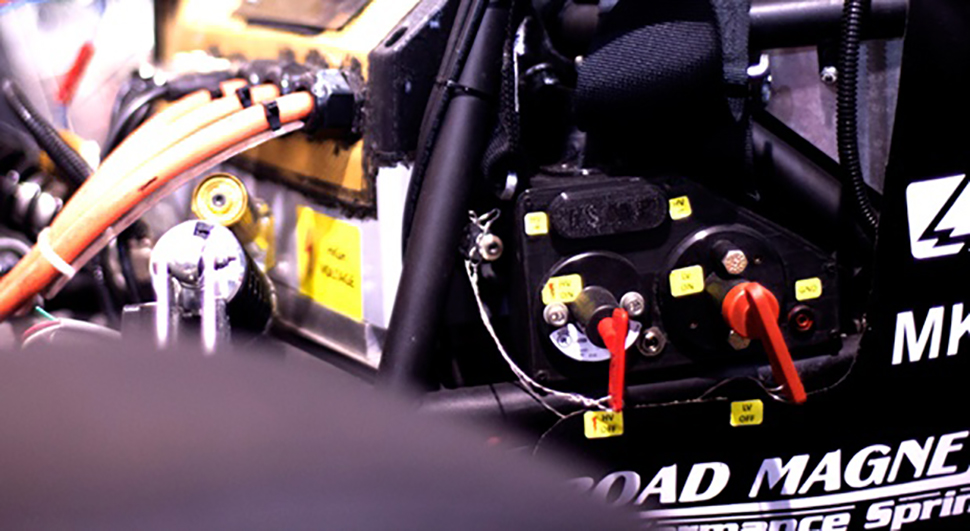 In addition to dominating the field in the electric car category, the team ranked well overall against traditional gas-powered vehicles. “With respect to the gas cars (which run on a different division but do the same events), we came in 4th overall in acceleration and 11th overall in endurance! So, for a very young team (this was our second car) we are already beating the majority of the teams that have been doing this for decades!” says Manfred Reiche, a senior mechanical and systems engineering student who oversees team management.

Attendees at the recent Philadelphia Auto show were able to get an up close look at the Rev1 on the main floor of the show at the Pennsylvania Convention Center.

The team has worked with NextFab for several years and credits NextFab with significantly reducing manufacturing time and cost, making it affordable to custom manufacture many of the performance components. One of the breakthroughs in the process was reimagining 3-dimensional parts 2 dimensionally, allowing the parts to be cut from sheet stock on the waterjet rather than machining them on a CNC.

Reiche relates, “Over the past couple of years, we used the water jet to cut aluminum components for our suspension and also Garolite sheets (G10-FR4) for our battery pack. Learning how to cut the Garolite took a couple of tries, due to the laminate properties of the material, but once [Alex Numann] figured it out the cuts worked great! It allowed us to build a very strong yet light enclosure for our battery pack.”

G10/FR4 or “Garolite” is a thermo-laminated glass epoxy material with excellent qualities for electrical applications where high heat, mechanical stability, and electrically insulating conditions are required.

Reiche continues, “Using these parts we built Rev1 (our second vehicle) and raced it at the 2016 FSAE Electric competition in Lincoln, NE. We had an amazing race!! Rev1 displayed the fastest acceleration (0-60 in 2.8s), fastest cornering speeds, and the fastest lap times, and ultimately won the main event! Overall, out of the 8 events at the competition, we won 1st place in 7 of them and took 2nd place in the last. The only event we did not take home was the Cost Competition, where Rev1 was slightly more expensive to manufacture than one of the other cars at the competition.”

The team has big plans for the 2016 season and will continue to make design improvements for their new car, the Rev2. “We are thrilled to have a proven battery pack and although we changed the chemistry of the battery cells to increase performance, the mechanical design and assembly remain the same,” says Reiche, “In order to win the cost report and to make Rev2 even faster, our goal is to drop our weight from 414 lbs to under 400lbs this year! Less weight will lead to a faster car, but in order to get there we had to adapt our manufacturing process. The 2-D manufacturing tools (water jet) were great to reduce our machine time and because the parts were simpler, they were inherently lighter. Therefore, this year we redesigned components in our power train, in our brake assemblies, and more components throughout our suspension that will be cut on the water jet at NextFab to make Rev2 the best performing student-built electric race car in America!”

Is your team looking for a place to make their project a reality?