Rick Wilson is a practicing dentist and an unabashed tinkerer with many passions. His latest project is a replica of a 1927, Telechron Queen Anne 505 clock.

Rick is always looking to improve things in his dental office, through modification or new design and fabrication. He is often at NextFab on Friday afternoons working on custom organizational solutions for his office. He has worked with wood since he was a young boy and in recent years has made a number of Japanese Shogi Chess sets. Shogi chess is one of his many passions. If that wasn’t enough, Rick is also an author and while writing a historical novel, his research lead him to yet another hobby. 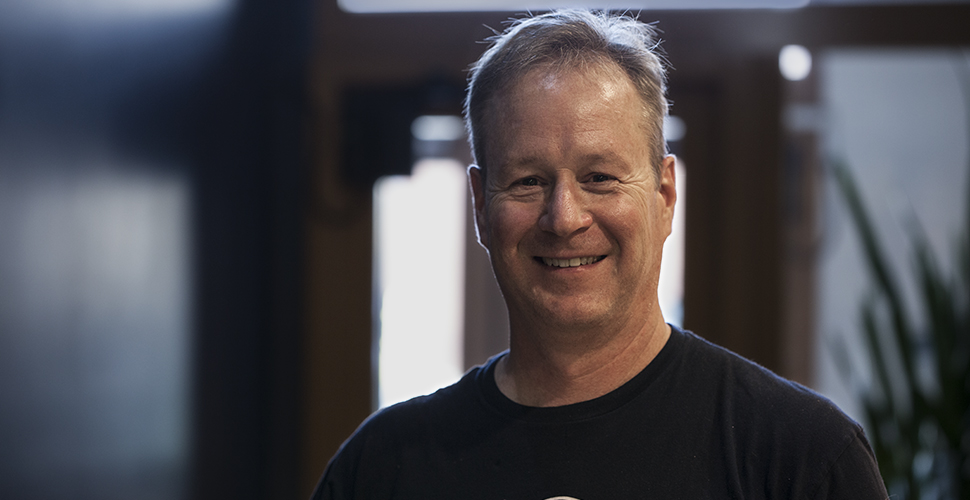 “I’m a huge stickler for historical detail, and needed a clock for our female protagonist’s desk,” Rick explains, “Mere seconds of research revealed the Telechron brand of electric clocks. The memories came flooding back! My first experience of Telechrons was when my grandmother had a Telechron tambour-type mantle clock when I was very little. My cousins and I were all obsessed with it. When my grandmother passed away, my aunt sold many of her possessions at a yard sale and this engaging and reliable clock was lost to the family.”

In order to get a better picture of the clock, Rick bought a Telechron on eBay, did a little internet research on restoration and got to work. “I was immediately hooked. One of the attributes of Telechrons that impresses me is that they still work. Most Telechrons I restore are between 60 and 80 years old, and after some careful restoration they run quiet and keep accurate time. How many of today’s technological artifacts will we be able to say that about?” Rick enthuses.

Rick’s research lead him to discover the very rare Queen Anne 505 Telechron and place one in his novel. The 505’s are incredibly rare and hard to find. Naturally, this was intriguing to Rick and he decided to have a go at building a replica.

Rick tells me, “It’s the rarity and beauty with this model. Only sixteen made, and in 1927 no less! Reflect if you will on how very different life was in America back then. Plus, once I decided to place the Queen Anne on our character’s desk, it took on great meaning for me.” 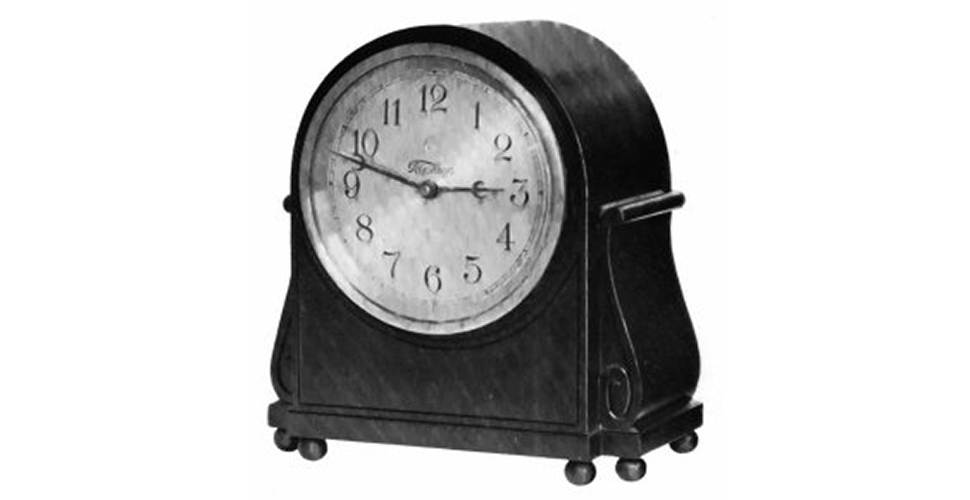 While the clock itself is incredibly rare, the 6″ movement and face used in the 505 is common.

Rick explains, “I certainly could not make the movement for this clock. However, with guidance of Al from Silverdollar Productions, the great experts in Telechron repairs, I found the proper movement on eBay. It cost less than $100, so I felt pretty good about bidding successfully on it. After all, there was no way I could make the entire movement myself!” Rick continues, “I then took the only known photo of the Queen Anne 505 and extrapolated the dimensions. Thank heavens Jim Lintz included the overall dimensions in his superb book Electrifying Time! I then drew (pixel by pixel in a sense) the Queen Anne as closely as I could from that one known photograph.” 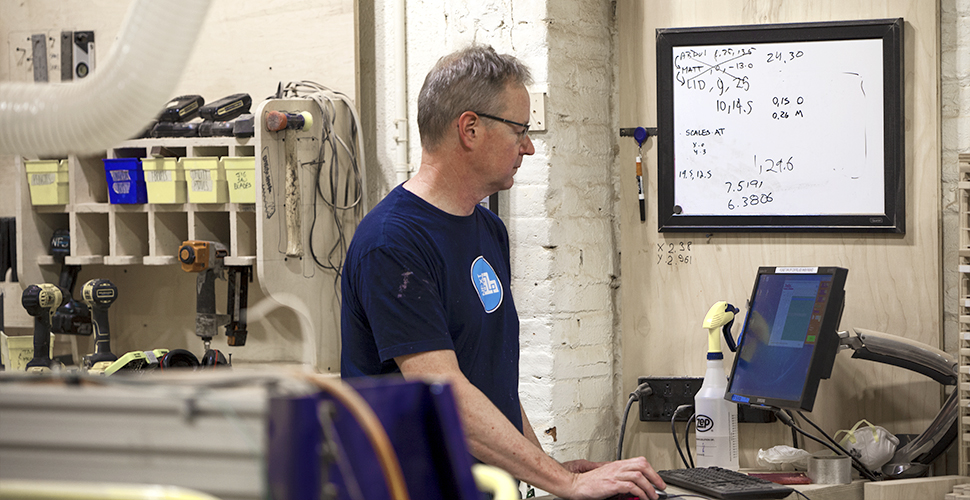 Soon after joining NextFab in 2015, Rick took the SolidWorks class. SolidWorks is a computer-aided design (CAD) and computer-aided engineering (CAE) computer program. Rick explains, “I learned only a tiny slice of this magnificent and rather endless program, but it was enough.” Using SolidWorks, Rick built a three dimensional digital model of the clock. Next, the SolidWorks file was converted to ShopBot tool paths. The ShopBot is a computer numerical controlled (CNC) router. It is used to cut and shape wood and other materials from computer generated files. Rick used the ShopBot to carve the mahogany for the body of the clock in layers. Once complete, the parts were glued together and the movement was fit. The next step was finding the right feet. The original has six unique round feet, but the original material is a mystery.

Rick says, “I found 1 inch steel spheres with threaded rods attached. Perfect! Since the only known photograph is in black & white, no one knows if the feet were silver to match the face, black to match the ebony or simply milled from mahogany to match the case. I went with silver, and my friends on the NextFab staff  approved, so that is how it shall stand.”

Rick graciously credits the NextFab wood shop staff with helping him to realize the project. “John Haggerty was, as always, my mentor and guide through this process and words cannot express his contribution to the community of makers at NextFab. Marc DiGiamo helped me make, by hand, the ebony inlay on the face of the clock. That wood is as hard as some metals, and Marc’s knowledge base prevented me from wasting any of it—which is grand, as it’s expensive stuff!” 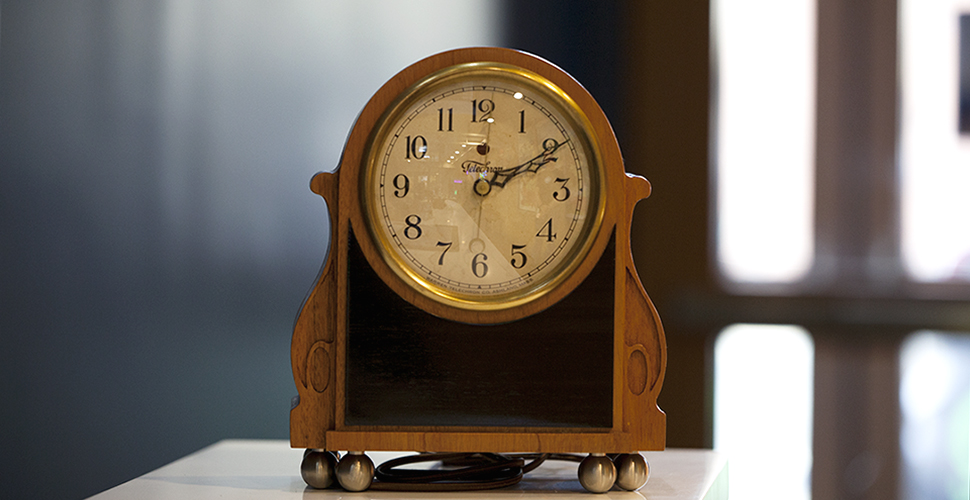 “I absolutely would not have made the 17th Queen Anne had I not been a member of NextFab,” Rick continues, “The machines, both analog and digital, are necessary to the process. I could not afford any two or three of them on my own, much less all of them. But more important even than that is the community. Every staff and every member I’ve met is bright, engaged, ethical, motivated and willing to share ideas and skills. I enjoy working alone, but it is so much better to be a part of a deeply interwoven community.”

Rick now has a large collection of Telechrons both at his home and in his dental office. He has so many that he’s taken to giving restored clocks to friends and patients. When I asked Rick about his next project he responded, “My favorite projects are the Queen Anne of course, and the carts for my dental equipment. These carts are ideal, and they roll on fine wheels made not only in the U.S., but right here in Pennsylvania! That’s another project—to make the ideal cart for endodontics, a procedure that uses a lot of little stuff. Time to organize it well!”

What fuels my passion is the disparity between how the world is and how the world could be. The older I get the more I realize the world can be so much better. Many of the world’s problems are surprisingly easy to correct, if we just get past our egos and confirmation biases.

To check out the ShopBot and other exciting tools and processes, schedule a tour today.