I first spoke with Jessie Garcia, the dynamic Founder and CEO of Tozuda, in the summer of 2016. Jessie developed a safety device that helps with early concussion detection. She had recently completed NextFab’s RAPID Incubator program, and just set up her office (which amounted to a desk) at NextFab’s South Philly location. Since then, Jessie moved her desk into an actual office space at NextFab and then expanded into a workspace nextdoor. She’s made great use of NextFab’s facilities, with administration at 2025 Washington Avenue, production nextdoor at 2019 Washington Avenue and a handpicked staff from NextFab’s member community. Jessie is about to launch a crowdfunding campaign so it seemed like a great time to follow up. 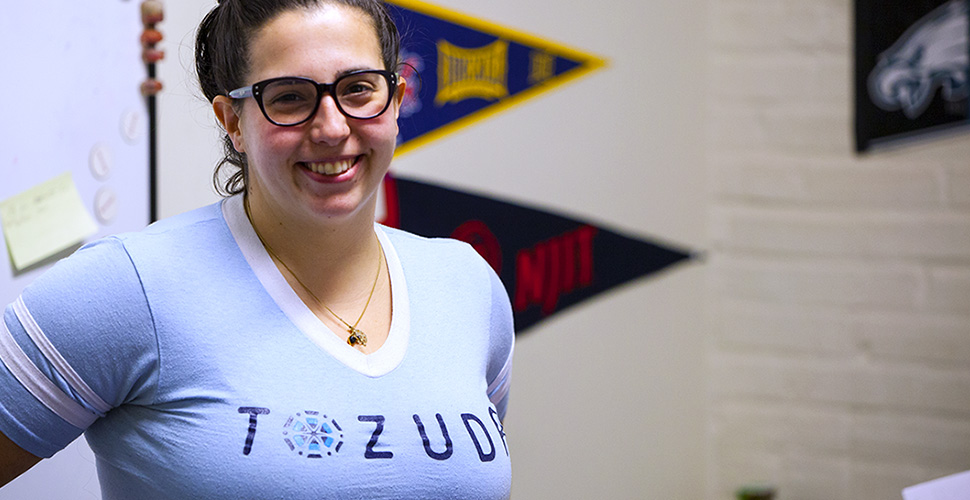 Jessie tells me, “Since we last spoke, things have really picked up pace but there were some major setbacks that we had to overcome first. For example, when we were doing the last blog our sensor mechanism was magnetic. We tested it in the lab and it worked great. Then we rolled out the product to our first batch of construction workers. Unfortunately, the product wasn’t performing consistently enough for side impacts. It was really disappointing and definitely frustrating from a product development standpoint. It had taken years just to get to this point. But we knew we had to pivot to make a solution we could be proud of.” And pivot they did. As often happens in product development, discovering a weakness can lead to making a far better product. 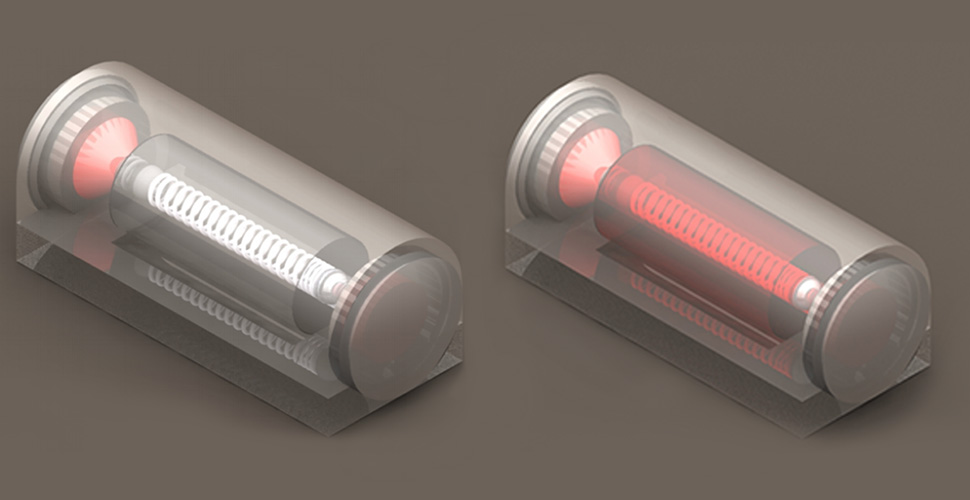 Last July, Tozuda went back to the drawing board. They completely changed the mechanism with an entirely new mechanical solution. The new design provides 360-degree coverage and still detects linear impacts.”It’s funny how things work out because this new, patent-pending design is even more robust than the first,” Jessie relates, “Not only can we calibrate the device for linear forces in all directions, the new technology can also be calibrated for rotational forces. This is critical for concussions in particular. We have beta tested this version of the Tozuda Head Impact Sensor with over 300 football players and 20 construction workers. We are now ramping up for our official product launch happening on Kickstarter this Spring 2018.” 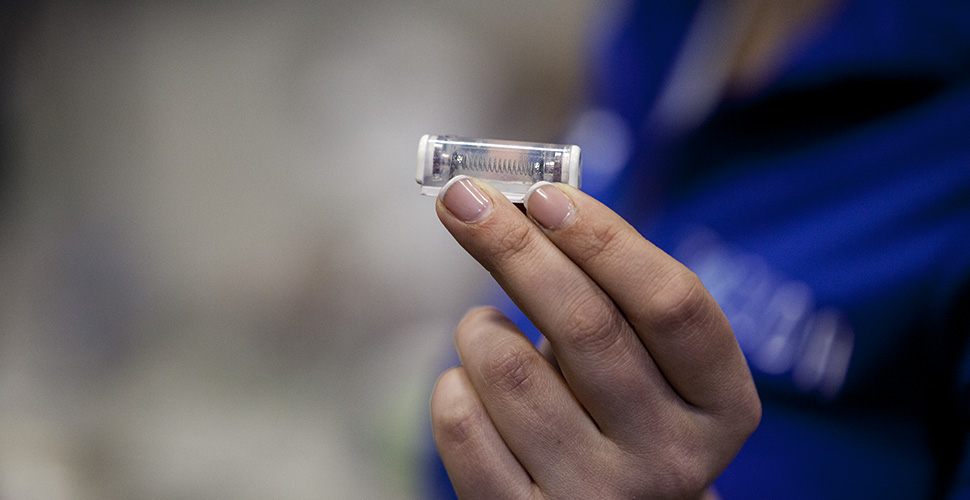 Jessie is currently running a staff of nine. She and member John Pettit are the only full-time employees at Tozuda, but they fill in the staff with consultants and interns. Jessie met John at one of NextFab’s Maker Happy Hours, a public event that happens on the third Friday of every month. The two quickly became friends after seeing each other in the co-working space all the time. Jessie tells me, “After http://findviagra.com learning more about John’s 40+ years experience as a VP of manufacturing and sales at Ktron, John consulted for me on a freelance project. This is where we realized we made a great team when working together and had complementary skill sets. Ever since John has joined, we have taken Tozuda from a product still in development to a product that’s ready to launch and scale quickly.”

John knew another NextFab member, Cameron Dye, and in turn introduced him to Jessie. Cameron is now their mechanical engineer. In addition to picking up talent from the NextFab member pool, Tozuda has capitalized on the city of Philadelphia. Jessie explains, “We are able to fill out our team using Philly’s school eco-system. With COOPs from Drexel and student interns from Temple, we’ve built an incredibly diverse team which we love! We have 3 team members from Vietnam, one from Saudi Arabia, one from South Africa, and of course we have the US represented by CA, PA, and NJ.” 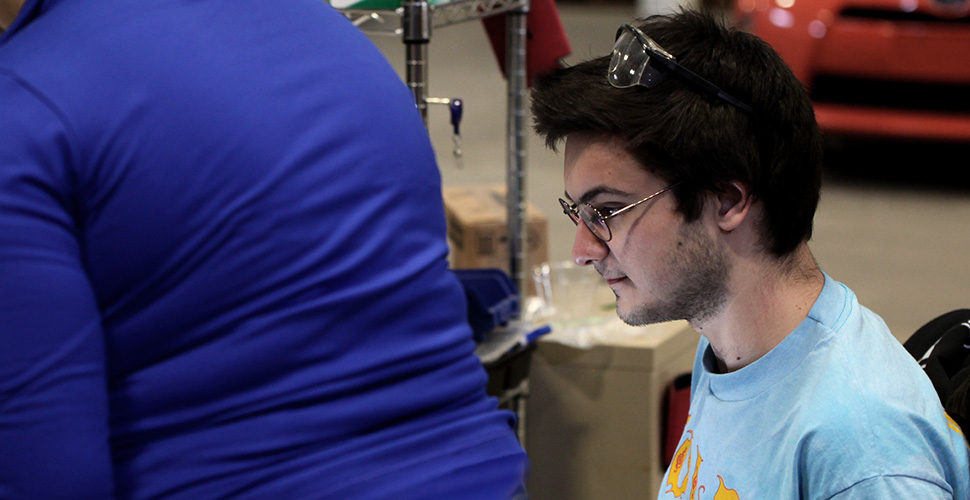 Tozuda is now ramping up their manufacturing capabilities. Jessie procured an injection molding machine, “Bertha,” in order to take production and quality control into her own hands. Bertha is a 1974 Boy Machine 15 ton injection molding machine. Jessie bought it from an injection molding facility that couldn’t get the machine to run. Jessie tells me, “I didn’t have a lot of money but I had the time to try and figure it out — it also didn’t help that the manual was all in German and missing pages! All in all it took 9 months to do all the repairs with our CTO Chris. In combination with using the Haas at NextFab to do our tooling for our molds, we have been able to make huge strides with our development without breaking the bank.  Now that she is up and running we can run about 3,000 parts in a day running at full automatic.” Tozuda is also offering small batch injection molding services to other members who find themselves in the same position that she was. 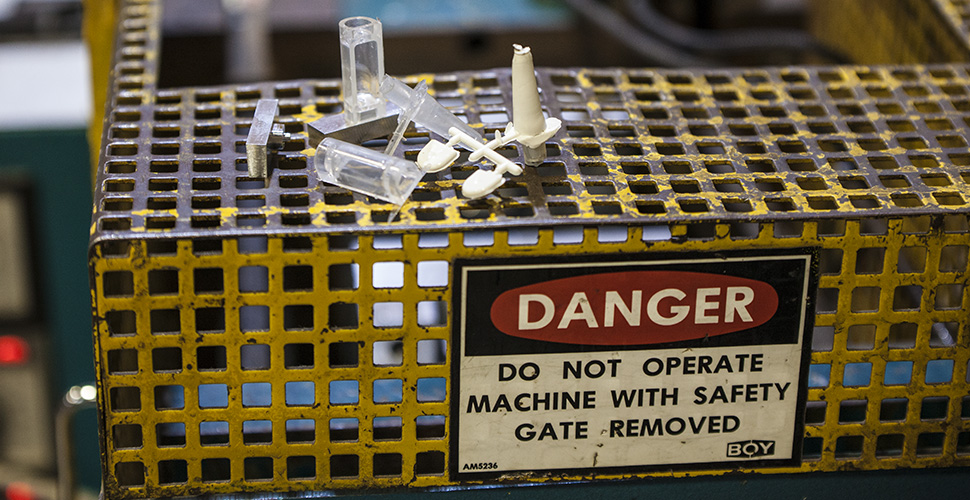 In anticipation of their Kickstarter launch and the fall 2018 football season, Tozuda is picking up the production pace. They are also honing their assembly procedures and quality control to ensure that sensors will be ready for shipment. For more information about Tozuda or for injection molding inquiries, go here.

Looking for the perfect home for your business? NextFab offers a variety of spaces and services to support local entrepreneurs ramp-up production and launch their products. Come in for a tour or contact us to learn more about business incubation at NextFab.